A fiery rocket to the stars. 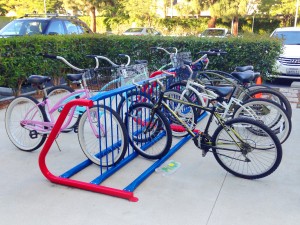 Google was just a search engine until they opened an office in next door Venice Beach and Santa Monica became “Silicon Beach”. Google became a place I’d like to work. Some sort of a Valhalla where great developer warriors went. The biggest thrill was when I got to park my metallic green bike with the pastel Google bikes. I wanted to stay out side and just look at my bike. I still locked it before walking around the front past the Claus Oldenburg two-story binoculars and pressing the intercom to speak with the door guard not more than 10 feet away. A xeroxed and hand colored letter sized page that looked like it could have been advertising a garage sale was the only indication that this might be the entrance to Google. After a brief negotiation I was buzzed in and directed to find my pre-printed name tag, then bade to ware it at all times. The badge clips where color matched to the Google logo. We were escorted past the guard through a tunnel with hundreds of the Google Doodles on the side. Here was the celebration of wonder I had come to witness. I had entered the Google. Cafeteria to our left. Because we were walking with Lee Shartzer who traveled in a wheel chair, we where taken the long way round to accommodating ada ramps. I hope Lee did it on purpose, because he seemed to get a lot of speed and skid up on two wheels as he rounded the tight corner at the bottom. He was smiling. We walked past my bike locked up with her new pastel friends, before turning right and to the conference room. 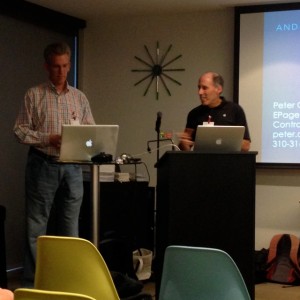 The speakers this month, Peter Olpe and Edward Arenberg had won an Android TV hackathon at USC, “a long time ago in February” Matt Kaufman, the group’s leader told the crowd of about 35 Android developers. Their challenge had been to develop an app for Android TV. “We sat thought a two hour orientation lecture and then had six hours to get an idea and code it up till it worked. “Eight hours for a 5 minuet presentation”, Edward said. The attentive Android developers did their best to ignore the presenter’s black tee with the white Apple logo. Peter, the coder of the pair explained the virtues of the Lean-Back Library, so named because you lean back in your couch as you thumb through screens. The Library, developed by the good folks at Google to enable rapid development of ideas and formats is available on line. (go ahead, Google it). The pair came up with the idea of a QVC style video app. Because Peter was doing all the coding, his partner and Apple tee wharer Ed had time to go around and shoot video contnet (presumably on his iPhone). As if brought in from central casting, a girl scout was out back selling cookies. She delivered a brilliant sales pitch. Too bad there was no audio at the final present. The point of the hackathon was to show off the Android TV and how little content had been developed. So get to work!

Matt Kaufman, the organizer of the monthly event showed us the web site www.udacity.com and demonstrted the free 10 week courses on Android Dev. You can pay if you are such a sissy that you need someone to talk you through it (my editorializing). The web site also featured “Nanodegrees” and courses that can be taken for credit toward a Google issued certificate. Matt finished by explaining the complex point system he developed that would qualify attendees for prizes at the end of the year. 1 point for attending. 10 points for giving a presentation. I have one point.

Google Development Group LA is awesome unless you’ve got an iPhone. Nearly everyone at the meet-up had an android enabled devise. In all, it would have been better if I’d won the tablet.