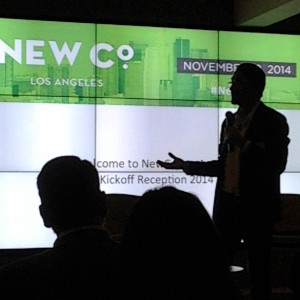 Organizer John Battelle, thinks of this two-day event to be part art opening, part music festival — like a field trip in a city. Battelle had been organizing “industry events” for lots of years, until one day he just got tired of the rent-a-banquet-room-listen-to-speakers treadmill. He enjoyed the moments between stages at music festivals like Coachella or Lollapalooza and wanted to find a way to get that dynamic operating in the start-up movement.  In 2014 New Co. events have popped up in Silicon Valley, Amsterdam, New York, the United Kingdom, Detroit, Boulder Colorado and San Francisco. Los Angeles is his eighth. 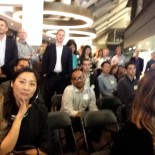 The first night of the event, was held at the offices of CBRE‘s Downtown Los Angeles Commercial Real Estate offices. Jason Nazar, Founder Docstoc and Start-Ups Uncensored sponsored my VIP tickets to this brilliant event and “Fireside Chat” between John Battelle and Ze Frank, President of Buzz Feed Motion Pictures. 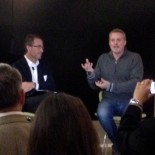 Ze broke down the meaning of morality and why dancing babies go viral. He instructed us, “to better understand post structuralism, put down your C++ manual and pick up Marcel Duchamp, Susan Sontag and Roland Barthes”. Frank also talked about how we tend to “characterize events” (like watching a movie or traveling in Italy) “is different from your actual experience” and “social media is a place to talk about that experience”.

Also presenting were Bear State Coffee, Enplug, Fem Inc., HeadSpace and Smarty Pants Vitamins. Among the dozen conversations I had, I met: the talented Molly Menzie, a Digital Product Manager from a place everyone calls the “major studio in Glendale” that I have come to understand as code for Disney; David Schwartz from Oblong, the people who bring us future thinking on human computer interaction, We talked about Tom Cruise and the computer interface created by Oblong founder John Underkoffler, in Minority Report; Tania Damha, The internet of Things and Guru Bhatt and Sam Ranganath of Masti Solutions. 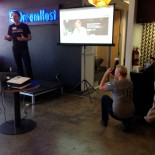 morning started for me at 9:30 am on the 50th floor of a downtown Los Angeles building at the offices of DreamHost. I went because the founders went to my Alma Mater’s sister college (maybe brother would be better?) Harvey Mudd College in Claremont. Hard to believe that actual humans run the black box of internet hosting. But there they were. And they were nice, and they put out a nice spread of croissant, donuts and mimosas. They assured me the building wasn’t swaying. Simon Anderson CEO presented a history of the company “bumps and all” to the early morning gathering of +25 people. I didn’t get the GoPro they gave away. www.dreamhost.com 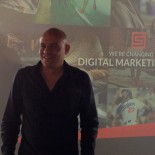 ext we sped off to SteelHouse‘s 18,000 sq. ft. Culver City office space. Valet parking took our cars before a mid-morning cocktail hour and Founder & CEO, Mark Douglas‘, presentation of digital advertising. Resisting the temptation to raise my hand and ask for a job at this blue chip start-up, I stayed for the catered lunch and gabbed with new friends while savoring desserts and coffee, pondering the post structuralist culture we lived in. Mark and his staff showed us a lot of hospitality that included a well-stocked swag bag as a parting gift. When the vallet returned my car, I ignored the apple I’d set aside in case I got hungry. www.steelhouse.com 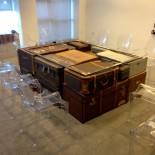 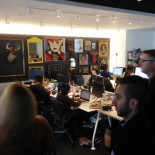 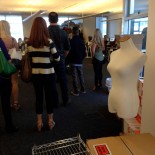 My next stop was Tradesy in downtown Santa Monica. Even though I live in Santa Monica, I got lost and parked in the wrong garage (ironic seeing as the next stop was Parkme, an app that helps you park in Santa Monica), I was more than a half-hour late for CPO, Sash Catanzarite‘s presentation “what it takes to design a great product. Hint: it’s a lot more than a pixel-perfect UI.” Luckily I had heard Sash speak at the UNCUBED conference last February. When Ruxandra announced a Tradesy tour I raised my hand and walked downstairs to visit the call and design centers. I had to admire the Gucci satchel meeting table, the penny rack and room the to grow downstairs. www.tradesy.com/team 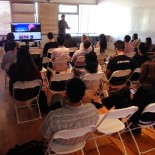 Rubber meets the road at ParkMe. Its co-founder and CEO, Sam Friedman showed us maps and graphs and told us how he and his co-founder rode around Santa Monica on their bikes signing up garages and lots for their new service. ParkMe has caught on like wildfire and is the process of becoming standard issue in Fords, Volvos and just about every other auto maker. Local governments across the world are falling all over themselves to provide ParkMe information. The big surprise for me was they didn’t have in-house design or coding departments. I walked the 6 blocks back to the garage next to Tradesy. www.parkme.com 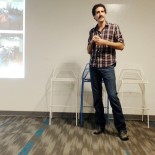 OK now, Momentfeed, my last company on the New Co. tour, was a little hard to pin down exactly what they do. In fact, after descriptions of the Venice garage they started in, the importance of customer service and analogies like “skating to where the puck is going” I had to ask Derek Browers, “What exactly is it that you do?” Derek explained Momentfeed maintained web presence for its client’s location. Ten years ago they had anticipated (“skated to where the puck was going”) that mobile was going to take over and they saw a need for ensuring that not only location information for a client, say 7-11, was accurate, but also corporate message as filtered by local community was on target. 7-11 doesn’t have just one Facebook page and Twitter feed, but has one page for each of its 1,200 plus locations. I don’t think it’s a trade secret that they use a spreadsheet to track and merge data into every post. www.momentfeed.com 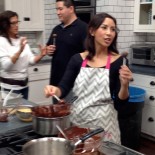 The last event of the day was hosted in Tastemade‘s awesome space in Studio C where they shoot their programs. I missed the food demonstration that included chocolate dipped gingerbread, but got the last two samples. Many of the folks I had met the night before were there, as were bacon and melted cheese sandwiches and “easy on the ice” Hurricanes. I went home and slept for two days. @gregordahl